There has been a long history of confusion regarding the efficacy of various therapeutic regimens, a fact that has often led to the success of disreputable physicians:

a) many patients improve spontaneously no matter what the therapy,

b) up to one third will feel better by placebo effect alone, and

c) the therapist's convincing conclusion that a bad outcome resulted from the patient's sinful behavior or tardiness in seeking medical help. 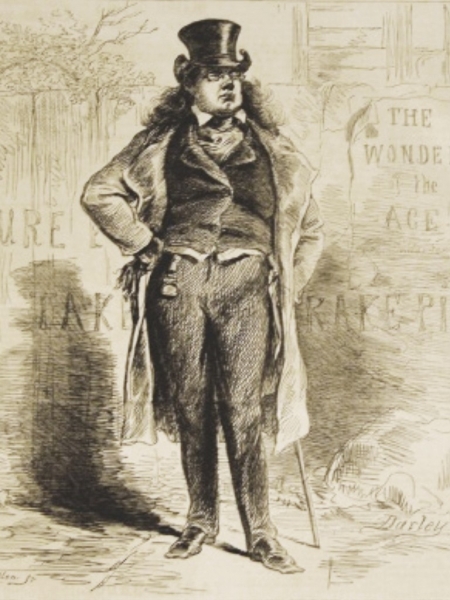 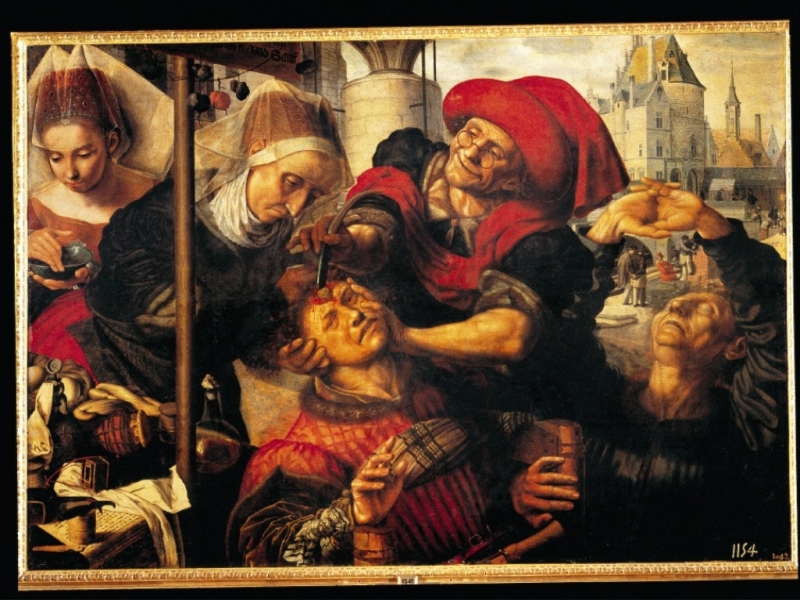 Extraction of the Fool's Stone, oil on wood by Jan Sanders van Hemessen (1500-1557)
Early quack physicians roamed the countryside curing the insane or possessed by removing the “stone of insanity.” The healer would make an incision in the forehead of those afflicted and, while palming a stone, he would appear to remove it for a cure. The present day expression describing one who exhibits unusual behavior as having “rocks in the head” is probably derived from that practice. The healer had moved on to the next town before his deception was discovered.
, 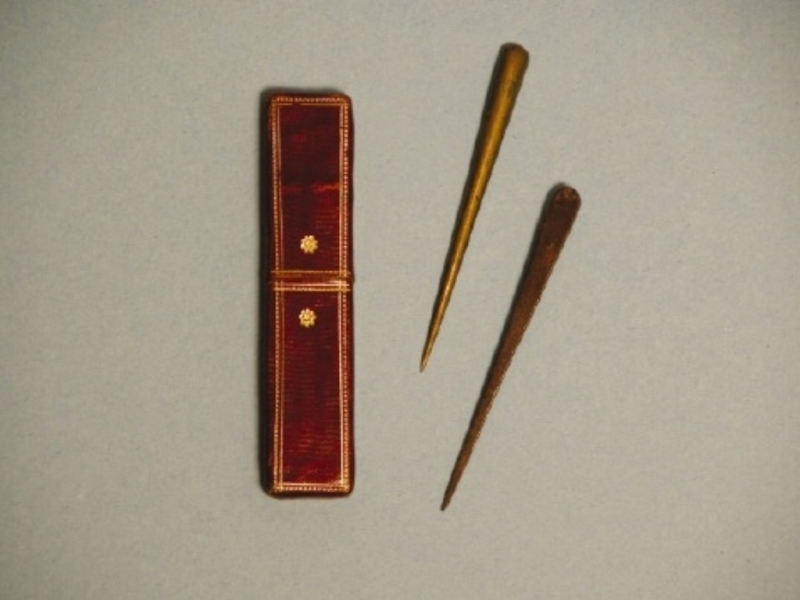 Perkins tractors from the Perkins family (ca. 1796)
On February 19, 1796, Dr. Elisha Perkins (1741-1799) patented the first medical quackery device in the United States when he created two metal probes which supposedly “drew out” disease and pain after being drawn across the skin on any part of the body. His “Perkins Tractors” were two rods of brass and iron, though one tractor was supposedly made of copper, zinc, and gold, and the other iron, silver, and platinum. 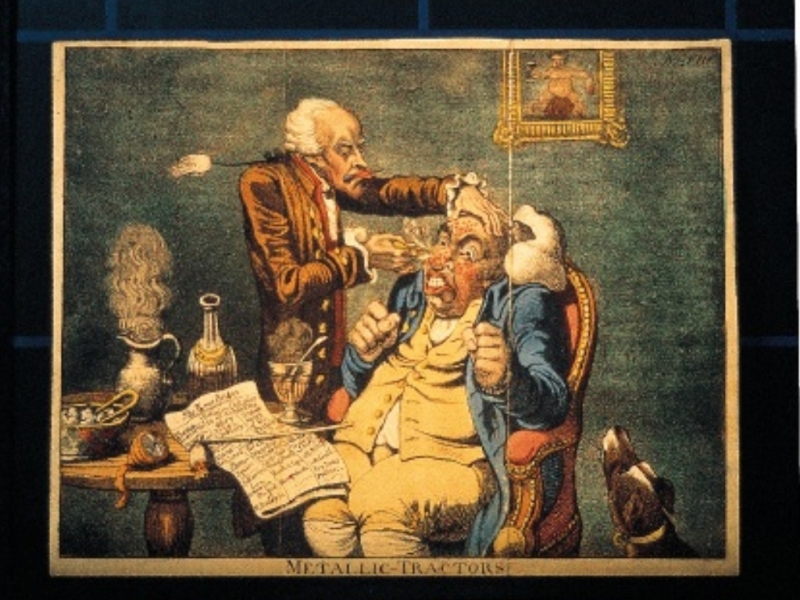 metallic tractors (1801), aquatint with watercolors on paper by James Gillray
a famous illustration demonstrating the use of Perkin Tractors
, 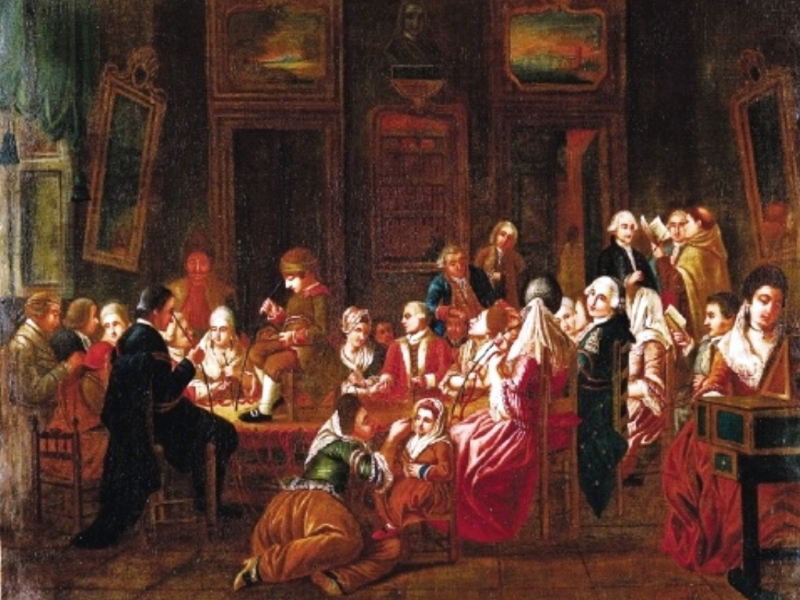 a group of mesmerized French patients (1778/1784), oil o canvas, artist unknown
The first to bring international attention to the possibility that imbalanced magnetic life forces (termed “animal magnetism”) could be an important cause of disease processes was the German physician Franz Anton Mesmer (1734-1815). Though he is recognized as an early pioneer of hypnosis, credit for that discovery went to James Braid, who refined the technique in 1842 and popularized the term “hypnosis” from the Greek word for sleep (hypnos). Dr. Mesmer’s legacy in the English language remains the term mesmerize, meaning “to cast a spell.” 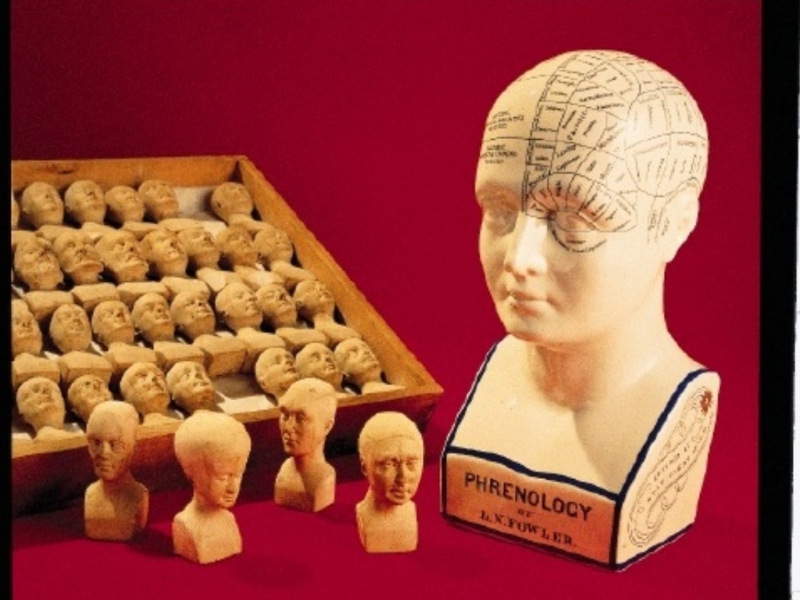 a case of sixty phrenology heads(1831) by William Bally, Dublin, ceramic phrenology head by Lorenzo Fowler1860–1896)
The assessment of character and intelligence through the examination of physical appearance is comical in one respect, though offensive regarding both race and gender in another. This “science” was taken seriously in the nineteenth century and was referred to as either phrenology or physiognomy. Phrenology, the study of facial characteristics as a reflection of personality, was created by a Viennese physician, Dr. Franz Gall (1758-1828). However, modern neuroanatomists would certainly agree that different areas of the brain are responsible for different functions and personality characteristics. 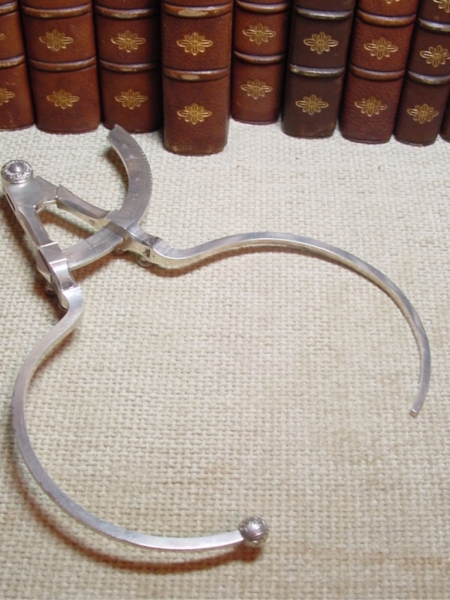 calipers for measuring dimensions of the skull
These are the calipers of George Combe, one of the founders of phrenology.
, 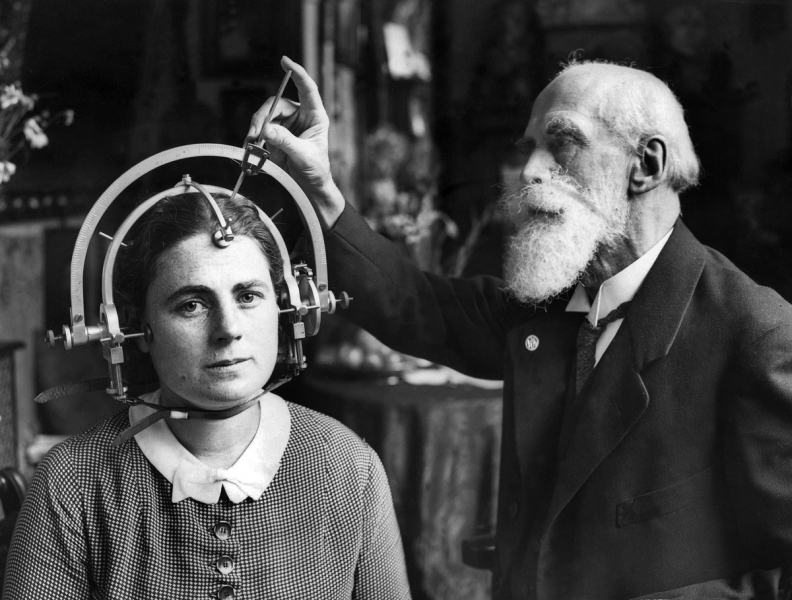 phrenologic measurements
German phrenologist Robert Burger-Villingen is taking measurements in order to determine the personality of his patient. 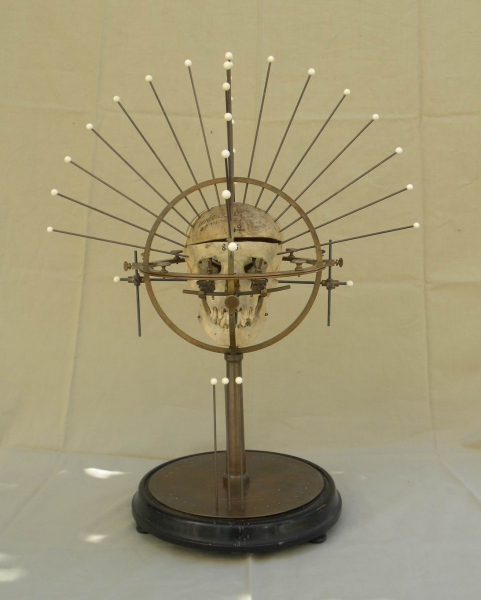 German craniometer
This is a late 19th century craniometer made in Braunshweig Germany for the determination of personality characteristics through skeletal anatomy. 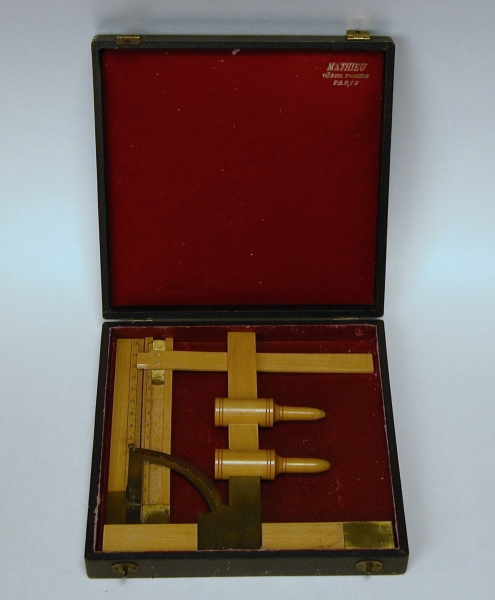 craniometer by Mathieu
Another 19th century craniometer, this one by one of the more prominent medical instrument makers in France.
, 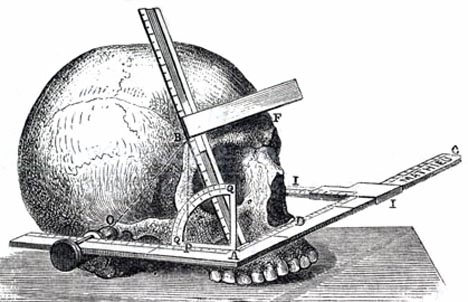 illustrated craniometer
This would be the Mathieu craniometer in use.
,

New Physiognomy or Signs of Character as Manifested through Temperament and External Forms (1880) by Samuel R. Wells
“The Melancholy Nose,” is one of several illustrations of the way in which many did (and do) equate appearance with personality and behavior.
, 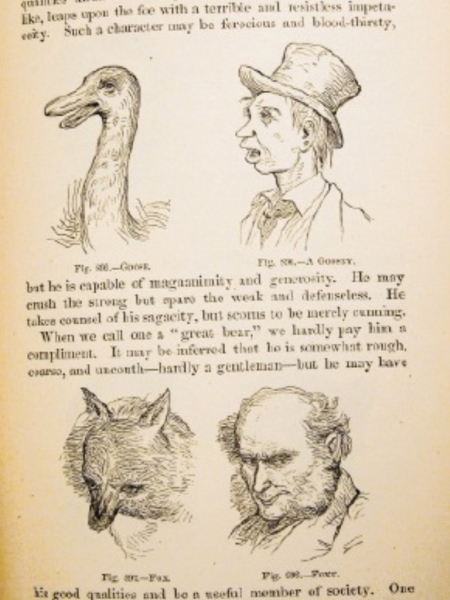 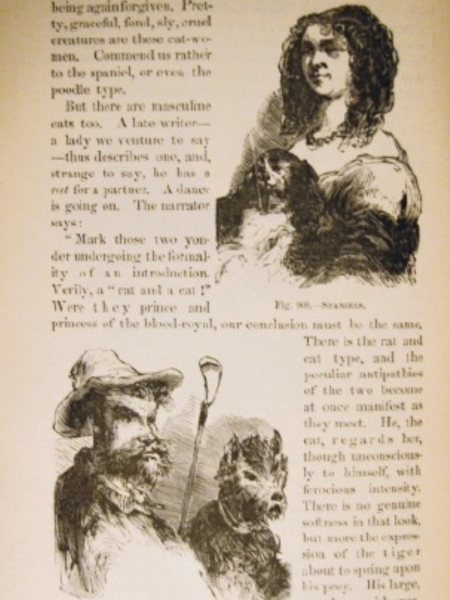 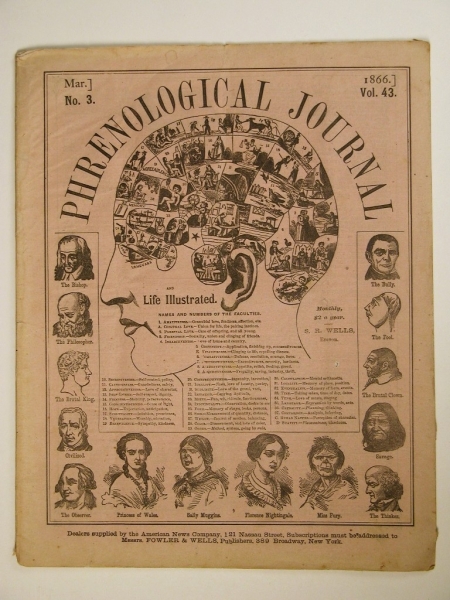 Phrenological Journal, March 1866
This is one of several journals published in the nineteenth century promoting the "science" of phrenology. Joseph Spurzheim brought these theories to the United States in 1832, suggesting that various parts of the brain were responsible for different personality traits, a kernal of truth that later found a more scientific footing. 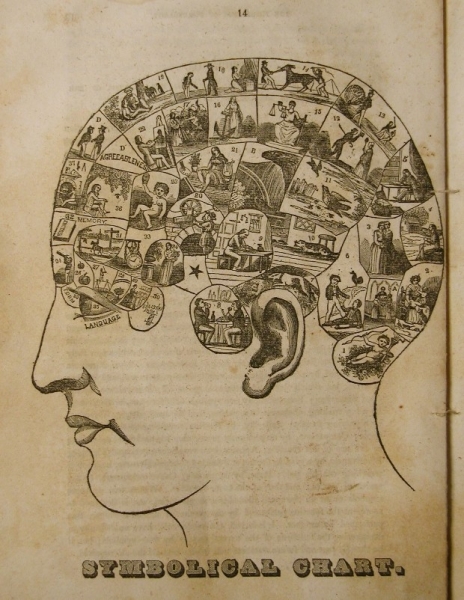 symbological chart from the Phrenological Journal
, 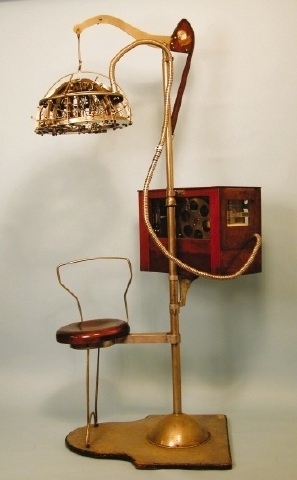 psychograph (ca. 1935) by the Psychograph Co., Minneapolis, Minnesota
In 1905, Henry C. Lavery of Superior Wisconsin invented his very complex Psychograph to evaluate personality by determining an individual’s head measurements. The Psychograph contained 1,954 parts and the cost to lease was $2,000 with an additional $35 a month. In only five minutes, the operator was able to describe a patient’s personality by print-out in thirty-two different categories that included constructiveness, secretiveness, caution, friendship, dignity, combativeness, and wit.
Quack Medicine 20th Century Charlatans